Tales From the Tee Blog

Ace: Completing the hole in on throw; a hole in one.

Anhyzer: A shot with large movement from left to right, for a right-handed player throwing backhand. This particular shot is thrown by launching the disc with the disc’s right edge tilted up.

Approach: Typically the second throw; meant for positioning the player for the best possible putt.

Approximate Lie: A lie that is established by a player group in order to resume play after a hazardous or rainy conditions delay.

Away Player: The player who is farthest from the basket. The Away Player is always the next to throw.

Backhand: A throw when a player throws across the body, opposite of the forehand throw.

Bead: Found on the underside of the rim. A beaded disc is more stable than a beadless disc. Beads are most common on Putt and Approach and Mid-Range discs.

Birdie: Completing a hole with one throw under par.

Bogie: Completing a hole with one throw over par.

Bottom Stamp: A disc with a blank top and a hotstamp on the bottom (underside) of the disc.

Burn: Whenever a stable disc has worn, it can lose its stability and can turn into an unwanted anhyzer. “Turn and Burn” is whenever a shot turns over and hits the ground mid-flight unexpectedly.

Candy Plastic: Golf discs made from translucent, clear plastic. Examples include the Innova Champion and Discraft Z-Line of discs. The discs have a hard candy appearance.

Casual: A hazardous area on the course, such as a puddle.

Casual water: A body of water on the course that had not been specifically designated by the director before the start of the round as “out-of-bounds.”

Ching: The sound made whenever a disc slams against the chains. The most satisfying of sounds.

Deuce: Whenever the player completes the hole in two throws.

Disc: The flying saucer shaped object that is thrown in disc golf.

Disc Entrapment Device: The target used to complete the hole – consisting of an upper entrapment of chains and cables and a lower entrapment of a basket. This is also referred to as basket, pole hole, or target.

Drive: The first shot thrown on a hole. This particular shot is thrown from an officially designated tee area for the hole.

Driver: A disc that is designed for a very fast and long-distance flight.

Eagle: When a player completes a hole in two shots under par.

Fade: The slow portion of the flight whenever a disc flies to the left.

Fairway: The inbounds path in which a player throws, advancing from the tee area to the hole, or basket.

Falling Putt: Whenever a player is within ten meters, they must not fall forward after a putt is released. If a player loses control or balance after putt release, a one stroke penalty is assessed.

Flex Shot: A shot when an over stable disc is thrown with an anhyzer. Whenever the disc reaches its peak, it will return back via the opposite direction. This is also known as an “s-curve.”

Forehand: A throw where arm motion extends away from the body, then pulls the disc across the player’s body to release/follow through. This is also known as a side-arm, opposite of the Backhand.

Green: The immediate area around the basket. Putts are considered any shot within ten meters of the basket. However, the green may be smaller or larger than this area.

Group: Competitors assigned to play a round to verify scores and proper play in accordance to the rules.

Hole: The target to be reached to complete the segment of the course. The hole also refers to numbered segments of the course that are separate units for scoring.

Holed-Out: When a player has completed the hole and removes their disc from the basket.

Hork (Hoskin): Angle of flight/release which is a dramatically exaggerated hyzer or anhyzer.

Hotstamp: The process when a graphic is stamped onto the top, or dome, of a disc. The resulting image is known as the hotstamp.

Hyzer: A disc’s arc whenever thrown will cause the disc to curve from right to left (for a right-handed player throwing backhand.)

Lay Up: When a player throws close to a basket to prepare for a putt.

Lie: Where the player’s disc stops and where they must take their next shop from.

Line of Play: Imaginary line on the playing surface that extends from the center line of the target through the center of the mini (marker) disc and beyond.

Mandatory: Area that the disc must travel in order to complete the hole.

Mid-Range: Shot used to get close to the hole. Also – the type of disc that is used to perform an accuracy shot, such as approaching the basket.

Mini Marker Disc: Disc used to mark the location of the lie.

Nose-Down: Throwing the disc with the front end (nose) tilted slightly down, used for throwing into the wind and straight shots.

Nose-Up: Throwing the disc with the front end (nose) tilted slightly up, allowing a higher flight and stronger hyzer.

Obstacle: A feature of the course that impedes any aspect of play.

Official: A person authorized to make judgements regarding the proper abiding of the rules during play.

Out-of-bounds: Area designated by a course director prior to the start of play in which a disc can not be played. This area is designated as unplayable – a penalty of one stroke is assessed when played.

Overhand: Throwing technique similar to a pitch in baseball. The disc is released at a vertical angle – also known as a tomahawk throw.

Pancake: Overhand shot that flattens out upside down; not to be confused with the traditional, tasty breakfast dish.

Par: The average number of throws that it takes an experience player to complete a hole. Amateur par can vary and pro par is normally three shots on any given hole.

Power Grip: Method of gripping the disc – where all four fingers are curled underneath the rim of the disc and the thumb rests on top. This grip is used for backhand throws and can add twenty percent to a player’s throw distance.

Putt: The final throw(s) of the hole where a player aims at getting their disc to rest into the basket.

Relief: The change made to the player’s lie/surrounding area. For example, an obstacle is removed from the vicinity or the lie is relocated away from the obstacle.

Roller: Specialty shot when the disc that is thrown flies, then lands on its edge, then rolls. This shot is recommended on a hole with no obstacles.

Rough: An area outside of the fairway or green. These are often areas with thick vegetation or are heavily wooded.

Sandbagger: A player who plays in a category below their competition in order to outperform easier competition.

Scissor Step: A term that describes the final three steps of the run-up for backhand throws. This particular technique results in a high degree of increased power and consistency.

Sidearm: A throw where arm motion extends away from the body, then pulls the disc across the body in order to release and follow through. Also known as a Forehand throw, opposite of the Backhand throw.

Snap: A quick release used by experienced players; like snapping a wet towel, in which the wrist is loose and acts similar to rubber band.

Spin: The velocity of the disc’s rotation.

Stable: The term used to describe a disc that flies relatively straight.

Supporting Point: A part of the player’s body that is in contact with the playing surface; or some other object that is capable of providing support at the time of release.

Taco: A warped disc, generally due to hitting a hard object, such as a tree, at full speed.

Tournament Director: The person in charge of all aspects of a given tournament and has full say on rules and play-related issues.

Tee Box: Where each hole begins.

Teeing Area: The area bounded by the edges of the tee pad. If a tee pad is not provided, it is the area that extends three meters perpendicularly behind the designated tee line.

Throw: The launch of a disc that causes it to change position from the teeing area or lie.

Thrower: The player who has made or will make a throw within the rules of play.

Thumber: A throw in which you throw the disc over-handed; like a baseball by gripping the edge of the disc with the thumb inside the rim and releasing the disc vertically; throwing high and with power.

Tomahawk: A throw in which you throw the disc over-handed; like a baseball by gripping the edge of the disc with the index finger inside the rim and releasing the disc vertically; throwing high and with power.

Turbo Putt: Chris’ go-to putt, the turbo putt is similar to throwing a baseball, in that you are tossing the disc forward while adding spin to it.

Turnover: Fast portion of the flight whenever the disc flies from left to right, or vice-versa.

Understable: A type of disc whenever thrown right-handed backhand will curve from left to right. Understable discs are more prone to turnover.

Velocity: The speed of the disc when it travels through the air.

Warning: Warning is the initial advisement that player has violated a rule, making them vulnerable to receiving a penalty throw for subsequent violations of the rule or set of rules within the same round.

X-Step: The term used for the final three steps of the run-up for backhand throws. This particular technique yields a high degree of power and consistency. This is also known as the scissor step. 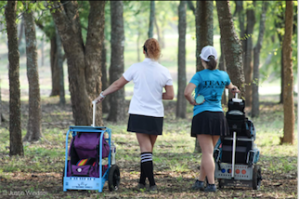 I would like to start by saying that our local guys in the Houston area have been very respectful towards me, and I appreciate all the support Chicks Chasing Chains has received…We are shocked often with how much love we get. Thank You!

I support the #RespectHERgame movement as I know issues happen…whether it be comments online, on the course or being disappointed because they were paired with a woman in doubles.

Unfortunately, most ladies do not have other women to play with. Sometimes they may feel intimidated playing with guys. With that in mind, many groups are working hard to grow the sport for ladies…. groups like Ladies First Disc Golf, Empowered Disc Golf, and Chicks Chasing Chains are specifically for women disc golfers. With one main goal in mind: Positively growing the sport of disc golf.

I’m heavily involved with my club: the North Side Chain Gang, I play many tournaments, and leagues, but I wasn’t HOOKED until the first time I played with a group of ladies! 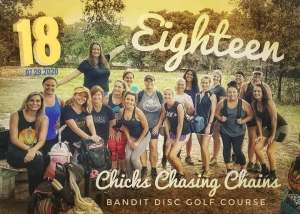 Guys, we love this sport just as much as you do. So, if you find yourself in a situation when you’re playing with a disc golf gal, take the opportunity to encourage, but not coach unless requested. Be patient…and hey, if you know other ladies or ladies league…plug her in.